Three cellar spiders were placed in separate  clear containers to allow observation without interfering with spider’s predation. Each spider was then placed in three varying temperatures of 29℃, 22℃, and 14℃. Prey were selected according to size because cellar spiders rely on the complicated matrix of their web to entangle their prey as the web is not adhesive.  Prey were observed to be consumed in time intervals of hours after insertion to the spider habitat. No energy was used to coax the fruit fly into the web and the spider ate the 2 flies out of the 3.

For our experiment, we will be studying the effects of starvation on Pholcidae spiders and demonstrate how their feeding time can be measured. Pholcidae spiders are cold-blooded and use a low amount of energy when not hunting for prey they remain still in their location to conserve energy and rely on low supply food to maintain metabolic rate. Though low food supply is needed for energy Pholcidae spiders will readily eat any available food when provided though the size of prey will be measured as Pholcidae will only hunt prey it can easily dominate.

From the equation, we can interpret that this line is a linear function through its equation by

following through the basic equation mx+b. Our represents

the slope and is the measured steepness of a line between the original point Y which is  4 units vertically. If we had a different equation as

we can also graph it as a linear function because it follows our mx+b format. We would first find our Y axis and follow the units down from 0 to negative 6. Negative 6 is our Y intercept, there are two ways we can graph this equation we can either move up three units vertically and move 9 units horizontally OR reduce our given fraction m(x) and y-intercept since they all share a common factor of 3. So our new equation can begin again as

like our previous statement this equation follows the mx+B rule 2 units down from the original negative two units we graph our second point 1 unit up and 3 units across creating a new slope.

Similarities found between current and ancestral primates demonstrates that arboreal theory was the most convincing because current Indriids and their digestion of available food in arboreal habitats demonstrate how adaptations were directed towards better living in arboreal living. Because of arboreal living Indriids had to adapt to consuming large amounts of vegetation from trees when traveling. This abundant amount of leaves is uneasy to digest Indriids adapted to this by having chambered stomachs allowing cellulose to be broken down and digested for absorption of nutrients. These examples demonstrate that arboreal theory is the best hypothesis because primate living was surrounded around to the availability of arboreal resources and primate anatomy evolved aiding in digestion of only arboreal resources.

The arboreal theory is best supported by strepsirrhines fossil records because there is a correlation found between ancestral Mesopropithecus an arboreal ancestor genus and the most similar to the Indriidae family. The similarity in body morphology between the two demonstrates arboreal theory as the most convincing because extended long limbs and long tails are found in current Sifakas and fossils of Mesopropithecus. Extended limbs are an example of arboreal theory because they demonstrate the necessity for primates when involving movement. From between branches in either suspensory locomotion by extended arms or jumping from branch to branch through extended hind limbs arboreal theory is supported by Indriids locomotion because current primate species such as the woolly lemur, Sifakas, and Indri demonstrate locomotion only in arboreal setting.

The adaptive origins of primates are concentrated around three theories, arboreal theory, visual predation, and terminal branch theory. Arboreal theory states that primates had evolved from their ancestors by adapting to arboreal living and have derived traits specifically for living in trees. Visual predation claims that early primates were mainly insectivorous, had adapted to forest undergrowth, and only inhabited the lowest tiers of the forest canopy. Terminal branch theory states that primates coevolved with angiosperm plants and adapted to having grasping hands in order to exploit flowers, fruits, and nectar.  All theories give evidence to why primates are born with specific traits but the most convincing theory is arboreal theory as evidence in strepsirrhines fossil records demonstrated early adaptation to arboreal living and suspensory locomotion.

The experiment required a photograph located at the W.E.Dubois library of a spider web on the left side of the indoor building's window. The experiment was intended to create a comparison between two figure panels the original and duplicate. To get the replicate photograph to be as exact as the original the experiment included a set of instructions with the location of the spider web, how to photograph the web, and what software was needed to present the panel. The instructions listed did not result in an exact replicate of the original copy, though the panels were in correct order small differences were noticeable such as the angle of the photographs including the spider web's distance from the camera lens and the format of the label borders. The results demonstrated that more accuracy in describing the instructions was needed to get the results wanted

The experiment provided instruction as to how the panel format should be presented in Swan’s method section. The instructor's guide began with opening Inkscape and begin importing the pictures onto the browser. That became a difficulty as Inkscape did not run on the current model of the experiment's designated Macbook pro. To accommodate the procedure the photographs were uploaded in the computer laboratory of Morrill two via USB import. The photographs were directed from the instructor’s method to be specific when placing in units of measurement by Inkscape and organize photographs in catalog order from the different views of the spider web and location. From the instructor’s guide, the experiment lacked consistency with the direction of measurement insertion, third-party help was needed to advance through the panel creation. The photographs were uploaded separately from the computer saved files and imported as images on to Inkscape. Each photograph is identified to serve purpose in this experiment the photograph of the stairwell demonstrated point of view and location in reference to the spider web, the screenshot of Live Maps identified the exact coordinates of the observer’s location and the dollar bill was used as a scale to identify size of the spider web.

No observation could be made regarding differences between the original and replicate photograph of the spider web as the instructor did not upload the original photograph into the research project. Though it can be inferred that the replicate was inaccurate as it is too small to be viewed by the reader. The experiment performed was flawed as the instructions for finding the indicated location of the spider web was unclear no markers were used to indicate the correct location or placement of the spider web. Instructor’s directions provided a vague basis as to what stairwell is the correct one. The directions should have required counting each staircase to know which is the exact one used. 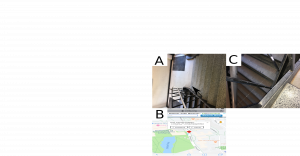 For the methods project the owner required that a ten dollar bill was a necessary accessory to be able to accurately perform his experiment. This was interpreted as the controlled variable of the project instruction because no measurement or accuracy was required for the physical project. The instructor interpretted his location as isolated and calculated the distance between himself and the web through physical steps of his feet. The instructions directed that the web is located at Morrill four on a lower tier set of stairs. To find the accurate location of the map the owner instructed to use the entrance map as a frame of reference to prevent misunderstanding. Though his instructions intended to be specific as to what doors to follow there was inaccuracy in this project. There was no indication as to what was the correct set of doors when entering the building because of this the instructions had the inability to verify which door of Morrill four was to be the entrance. The instructions guided the participant to reach the lowest staircase of the door but did not specify whether the stairs lead to floor one, two, or three of the building and the distance between the web and the observer was not specified. The instructions did provide a specific requirement before taking the photo, though no distance was determined between camera and web.